It is an understatement to say that October was a challenging month to be an investor. Or to have an investment portfolio. It was the market's worst month in 21 years. It was a month when, as my blog post earlier this month notes, the 201(k) became the new 401(k).
Warren Buffett certainly got deserved kudos for trying to buck up the beleagured investor class with his Oct. 17 New York Times op-ed, titled "Buy American. I Am." In it, he sets forth a piece of investing advice that he is famous for — "A simple rule dictates my buying: Be fearful when others are greedy, and be greedy when others are fearful."
As we get set to start a new month, in which we can all hope to make up some of the fearsome losses of October, let me share with you another piece of investment wisdom that I think should be as top of mind as Buffett's.
It comes from John Neff. Neff is not in the godlike pantheon of Buffett, but he is an investment Hall of Famer by any measure for his long tenure at Wellington Management Co. running the Windsor Fund. If you have not read his book, John Neff on Investing [John Wiley & Sons], put it on your must-read list. It is an investment primer deserving close study, particularly for investing in treacherous times when markets are going against you in a big way, as they often did for Neff with his contrarian stance.
I spent some good time with Neff in the past. He was one of the historians I interviewed for the Directors & Boards special 25th anniversary "An Oral History of Corporate Governance" edition published in 2001. Neff achieved his superstar portfolio manager status with a splash of activist shareholder as part of his playbook. He then became a corporate director to top off his impressive career.
Now to Neff's piece of wisdom that can go toe-to-toe with Buffett: "Merchandise well bought is well sold."
There seems to be a lot of merchandise on sale right now. Is it time to buy? Maybe Neff's guidance will apply — to individual shareholders, institutional investors, and dealmaking CEOs and boards. Think of how these current prices will change a year or two, or more, down the road. Will you be muttering to yourself, "If only I had pulled the trigger?"
Posted by James Kristie at 4:34 PM

Executive Sessions in the Early Days 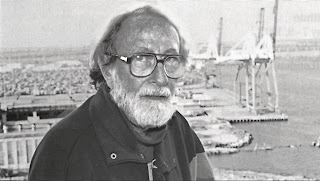 We've just marked the first-year anniversary of the passing of Stanley Foster Reed, founder of Directors & Boards. Stanley died on Oct. 25, 2007, at the age of 90.
His obit in the Washington Post is a good backgrounder on this eclectic and entrepreneurial executive, but only hints at what an early guru he was in corporate governance. The term was not even in the popular lexicon when he founded the journal in 1976. In fact, he taglined his new publication "The Journal of Corporate Action," and not "The Journal of Corporate Governance."
He didn't suffer fools gladly, befitting his years in the board trenches. I always got along well with him both when I joined the journal in 1981, right after he sold it to its current owners and he stayed on for a while as a consultant and eminence grise, and for years afterward for the occasional phone chat. Of course, his daughter, Alexandra Reed Lajoux, brilliantly helmed the journal during this transition period from old to new ownership. Alex is still a force in the governance field as the chief knowledge officer of the National Association of Corporate Directors.
Stanley wrote so many profound commentaries on board behavior while he was publisher and even years after. The picture of him above comes from a photo taken for a reflective essay he wrote for the journal's special 20th anniversary issue in 1996. Since he was a corporate director himself, his writings were infused with his own experiences — the good, bad, and even the ugly.
One of Stanley's confidences to me that always made an impression was when he took me aside one day to say, "You know, Jim, some of the most productive conversations that we board members ever had were in the rest room during breaks in the board meeting." I could tell from his tone that more than one CEO's fate was probably sealed behind the bathroom door.
Who needed the formalization of executive sessions? This was the executive session at the dawning of the modern era of corporate governance. Much has progressed since, thanks to pioneers like Stanley Foster Reed.
Posted by James Kristie at 8:38 AM

All Risk All the Time 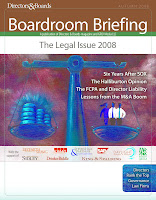 If there was one word on the lips of the 700-plus attendees at last week's annual conference of the National Association of Corporate Directors, it was this: "Plastics." Whoops, wrong blog.
Seriously, and I do mean on a more serious note, that word would be "Risk." Actually, that word usually came with an appendage — typically, risk management ... risk avoidance ... risk identification ... risk mitigation ... risk behavior ... and other iterations.
How about litigation risk? Yes, that too, for sure.
This is a good time to get comfortable with general counsel. Directors can be forgiven for reaching for the holy water and crucifixes at the approach of a lawyer. Whether that be a counselor working for the board or against them, a lawyer on the scene can bode ill. That sucking sound you hear can be money, time, and reputation just oozing away.
I make a few constructive comments about our colleagues in the bar in my introduction to the Directors & Boards Boardroom Briefing "The Legal Issue" just recently published. It will give some comfort that a strong and collaborative relationship with in-house and outside counsel is what you will need to be well armed as we enter a heightened age of risk.
Posted by James Kristie at 2:23 PM 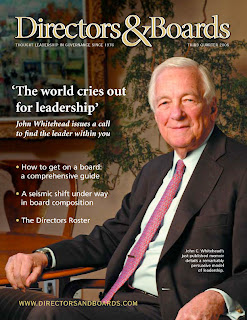 I always enjoy a Yiddish expression dropped into business conversation. My paternal grandfather spoke Yiddish, which may be one reason why the language resonates with me.
I'm just back from the National Association of Corporate Directors (NACD) annual conference. There is much fruit for future blog posts to come out of the sessions and speeches. Here is the first.
The NACD, in a brilliant decision, presented its Ken West Lifetime Achievement Award to John Whitehead. John's credentials and accomplishments would not even fit into a supersized blog entry. Suffice for current purposes to say that John is a former co-chair of Goldman Sachs and one of the most renowned if not revered banker-businessmen of our times.
In a buildup to John's stepping on stage to be handed the award, a short film was played that showed several friends and colleagues lauding the honoree. One was Josh Weston, former head of Automatic Data Processing Inc. The accolades were piling up to the ceiling of the JW Marriott ballroom.
Finally, as the tape wound down, Weston admitted that there was no word in the English language that could capture the essentialness of John Whitehead. The only word, he said, that could do justice to John was this: "Mensch."
Josh had it right, and the 700-strong crowd knew it. They jumped to their feet to applaud what a stand-up guy (a lame interpretation of the Yiddish salute) John Whitehead is. Our congrats to John, with whom we did a cover story interview in our Summer 2005 edition, on this well-deserved recognition.
Posted by James Kristie at 2:41 PM

Before a few weeks ago, what the initials TARP meant to me were Temple Association for Retired Persons — an educational outreach program that my alma mater, Temple University, offered to the retired citizenry in its Philadelphia community that was run by a longtime close colleague, Patricia Rooney.
Well, not so much now for that name association.
TARP is the Troubled Asset Relief Program that has been rushed into being to help mitigate the toxic mortgages held by the nation's banking system. We'll see how mitigating this whopper of a program is. Neither the stock market nor many members of the punditry or the citizenry have given it much of a ringing endorsement.
Truth be told, I wouldn't argue with anyone who thought TARP stood for Tycoon Assistance Relief Pact.
And referring to new monikers, I'm scribbling these thoughts on the morning after another deep swoon of the market — down over 500 points on Wednesday, Oct. 22. I'm afraid to go to the Fidelity website to peek in on my 401(k). It might now be a 201(k).
Posted by James Kristie at 8:22 AM

A Ring of the Bell

Market mavens say they don't ring a bell at market tops or bottoms. Do you believe that? I don't.
Can't you point to past instances where a little voice inside your head said, "This is a decisive moment in a trend line"?
Here was one for me: When Blackstone went public last year. I don't think I was alone in thinking that, "Yes, this is some kind of a market top." What beautiful timing for the Blackstone partners. This was actually a second dip at the timing well — how about their great timing in buying and then immediately selling off huge chunks of the Equity Office building portfolio earlier in the year? What would their fortunes look like now had they held onto that real estate for even a few additional months.
I don't begrudge them their timing. I begrudge not acting on that little voice inside my head.
I just listened in to what might well be a ring of the bell on executive pay.
My pastor at Sunday services, for the first time ever from this pulpit, railed against the unjust compensation practices of corporate America. When a conservative minister turns from Biblical passages for his weekly sermon to lash out at the salaries and bonuses given to company leaders who have led the nation into deep doo doo ... well, I hear bells — and it's not the usual melodious ringing from the parish steeple.
Forget Barney Frank. Forget 'say on pay.' Forget Hank Paulson and his TARP-induced strictures on exec pay. When the clergy of America become so incensed over the unfairness of board-approved pay for failure that they feel an obligation to use the pulpit to express outrage, then we've hit some kind of a trend point.
I don't know if you'd describe it as a top or a bottom. A top in the inequities of pay practices. Or, a bottom in the sense that the craziness finally ends here with the stock market crash of 2008 and that there is no way but up for boards in crafting pay plans that truly reflect management's performance.
But I say a bell has rung.
Posted by James Kristie at 11:26 AM

End of an Era

It's rare that an editor will have the opportunity during his or her tenure atop a masthead to write an "end of an era" commentary. But I feel that the Editor's Note I wrote for the Directors & Boards e-Briefing October issue is one such editorial.
Perhaps it's appropriate that I begin this new blog on an "end" note.
Posted by James Kristie at 4:20 PM