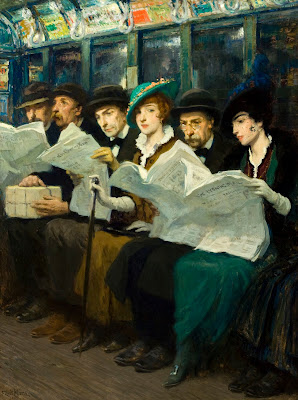 When I first got into business news in the mid-1970s, this branch of journalism was a backwater in the mainstream media industry. (This is after getting a journalism degree from a top-ranked J School in which there was zero focus on business reporting.) As things turned out, I ended up taking a job with a start-up business trade newspaper, and have spent my whole career since putting out business publications.
When I was being recruited to be editor of Directors & Boards in the early 1980s, corporate governance wasn't even a term in the popular lexicon. Sure, there was a hubbub about foreign payoffs in the mid-'70s but that seemed largely confined to the pages of The Wall Street Journal with its tiny agate typeface at the time, which would be unreadable now (remember that?). So I turned this job down at first. I was then editing a weekly regional business magazine, writing about finance, marketing, management, strategy ... but not anything about corporate governance. In fact, in the two years that I was a senior editor for this weekly magazine I can't recall one story we ever published about a board of directors. Boards were in deep background, not even a pimple in a corporate profile. Putting out a quarterly journal on this arcane concept of corporate governance thus held zero appeal. But again, as things turned out (a story in itself), I eventually relented to the recruitment effort and took the job with Directors & Boards.
In the almost 35-year trajectory of my career in business journalism, the backwater was left far behind. Business news became a hot topic — think about M&A mania, the various bubbles and bubble-burstings, the scandals (Enron, anyone?), the rise of Wall Street banker-tycoons and celebrity CEOs, the global expansion, the hoi polloi becoming shareholders, et al., up to today's Great Recession. And in that time "corporate governance" now trips lightly off the tongue, and boards have moved front and center as an angle in breaking business news.
Well, things change again. That hotness is cooling off, as per this sobering commentary by David Carr, "Business Is a Beat Deflated," in the New York Times, and Fortune columnist Stanley Bing's musing on his Bing blog, "How To Save Business Journalism."
Those in the business beat are not immune from the Grim Reaper — the financial crisis, the cyclical advertising downturn, the secular transition from print to digital, the changing patterns of readership — that is killing off great swaths of print media and those who work in it.
But we may have put the bottom in. Just yesterday the death of Editor & Publisher was announced. This is the monthly journalism trade publication, now shutting down after 108 years in business.
Okay, I'm going out on a limb here. It's said that they don't ring a bell at tops and bottoms of the market. But I'm calling a bottom in the death plunge of the print media industry. There may be some more pain to come, but could there be any louder clang than the killshot to Editor & Publisher to signal a coming bounceback for the print media? I say no.
That means plenty more and hearty coverage of business — and boards — to come. There will be no return to behind-the-curtain status for directors, nor will corporate governance become again an arcane term in the business lexicon. The bottom is in.
[Illustration: "Evening News" by Francis Luis Mora (1874-1940), oil on canvas, displayed at the James A. Michener Art Museum, Doylestown, Pa.]
Posted by James Kristie at 8:43 AM