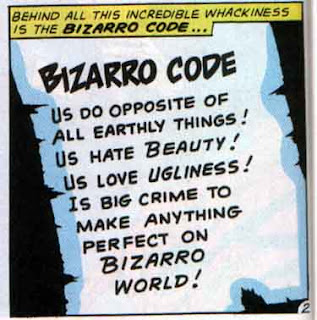 I consumed DC Comics as a kid, which was my first exposure to Bizarro World, and I'd laugh at the Bizarro World skits on "Saturday Night Live" in the 1970s. But who could laugh now as we digest the details of AIG's bonus payouts. This is a whole new orbit of Bizarro World — a weirdly mutated version of life and finance.
What is there left to say that hasn't been said by outraged politicians, government bureaucrats, the press, "talking head" commentators, and incensed taxpayers and shareholders? Other than that it's Bizarro World — lose unimaginable gobs of money, even destroy the company, but still be eligible for millions of dollars in bonuses.
Well, I do have a few questions:
• If AIG went bankrupt, would these supposedly inviolable contracts be honored? Here we have an insolvent company that is on government life support. This doesn't give the conservators the right to rip up the contracts? To the aggrieved bonus recipients, I'd have three words: "So, sue me." Anywhere but in Bizarro World these "contracts" shouldn't mean spit.
• How is it that the AIG board hasn't been forced to step down by now? How is it that the board even stays out of the limelight and headlines like it has? Can you name one person on the AIG board? Could a fresh team of gunslinging governance and turnaround types do any worse than the present board, which has presided over this historic disaster? Anywhere but in Bizarro World the board shouldn't mosey along in the shadows when a disaster of this scale strikes.
• And, who are these guys that crafted these unbreakable contracts? Every CEO and board member should be thinking to themselves, "Next time I have a contract I need made up, that's who I want on my side of the negotiating table." Talk about rocket scientists on Wall Street! They're not on the trading floor but in the legal department. Anywhere but in Bizarro World the biggest guns in the White House, the Congress, and the Treasury Department should be able to trump the sharp-penciled types who drew up these contracts.
Oh my. What's left except to say, however lamely, "Boards, be careful what you contract for." You never know when your boardroom may turn into a very public episode of Bizarro World.
Posted by James Kristie at 8:08 PM