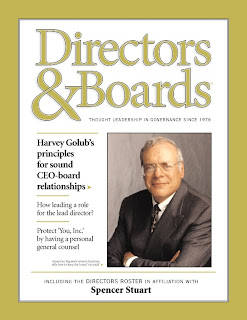 It's good to see Harvey Golub's name among the six nominees announced last week for election to the board of AIG. He and the other nominees are taking on a huge challenge, but the briefest glance at his c.v. gives one confidence that he's got the right stuff for the task at hand. He retired from American Express Co. in 2001 after seven years as chairman and CEO, a tenure during which the company achieved record earnings and the price of its shares increased sixfold. Director experience comes from service on the boards of Campbell Soup Co. (including a period as nonexecutive chair), Dow Jones & Co., Warnaco Inc., and other public and private company involvements.
Confidence also comes from a rereading of the cover story he authored for Directors & Boards in 2004, in which he laid out key principles for CEO-board relations. Here are three that strike me as especially pertinent to the situation ahead at AIG:
• "The CEO should not try to be the board members' best friend. Some believe that by keeping up an extensive schedule of private dinners and special events with directors, a CEO can build an atmosphere of rapport and friendship that will carry over into the boardroom. But the board is not the CEO's friend — it is the CEO's boss. The board of directors is not just a collection of individuals — it is an institution with a responsibility for representing the interests of shareholders. Friendship should never allow a CEO to get concurrence when it otherwise wouldn't be coming."
• "The important challenge for the CEO is to keep the board on track. It is essential  that directors be able to focus on the overall strategic issues and understand the company's strategic goals and how the business processes help advance them. On a good board, there is too much experience and judgment sitting around the table to waste it on anything of secondary importance."
• "The last piece of advice I would give a CEO is to be completely open and honest. Be careful to discuss the failures as well as the successes. Never surprise the board. Never ask it to vote on a complicated issue without explaining its nuances and risks."
AIG got wrecked on the nuances and risks of its businesses — and the seeming lack of understanding of such in the boardroom. Anyone concerned about the soundness of the financial system and the return to health of essential players like AIG can only hope there is a lot more explaining that will be done in future board meetings under the demanding oversight of its new directors like Harvey Golub.
Posted by James Kristie at 8:40 AM