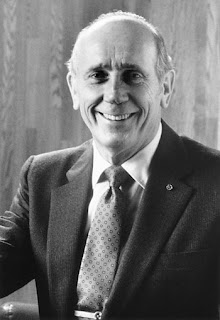 Both the Wall Street Journal and the New York Times did a good job with their obituaries of Harry J. Gray, tracing his hardscrabble beginnings to rise to the chairmanship of United Technologies Corp. "The Grand Acquisitor," as he was known for his voracious appetite for dealmaking, died last week at the age of 89. Gray was in office in my early years as a journalist, so I well remember him as he built what the Times called "one of the world's broadest and most powerful conglomerates."
Here is one story about this dynamo's leadership that didn't make it into either the WSJ or Times obit. Another Harry J. told this tale — Harry J. Bruce, former CEO of the Illinois Central Railroad and a leadership maven who wrote a cover story for Directors & Boards in 1997 that brilliantly dissected the characteristics that make up a successful CEO. Here is Harry Bruce's reflections in that article on Harry Gray as a leader in the making:
"The corporate world knows and respects this Georgia native and highly decorated World War II veteran as the retired chairman ad CEO of United Technologies Corp. How many people know, however, that Gray first emerged as a business leader in his second job, when he joined Greyvan Lines, the Chicago-based household moving and storage subsidiary of Greyhound Lines?
"On taking his new position in 1951, Gray was puzzled to note that Greyvan was assessing warehouse charges based on how many square feet of floor space a customer's goods occupied. Yet the operative figure, as he saw it, should have been cubic capacity. If Greyvan were to begin costing and charging based on three dimensions instead of two, Gray reasoned, revenues would improve dramatically.
"Pushing firmly but diplomatically for his innovation, Gray was able to overturn a historic, industry-wide practice. The results were as he had hoped: Greyvan's bottom line began improving immediately.
"Gray's approach represented a fresh rethinking — and redoing — of a conventional, unquestioned procedure that had become so endemic to an entire industry that only a confident outsider could grasp its fundamental absurdity. In trusting his viewpoint and influencing his superiors to embrace it, young Gray displayed true leadership without portfolio."
Harry Bruce's concept of "leadership without portfolio" is one that he says he came up with after reviewing the careers of many successful CEOs and realizing that their rise to the top wasn't "as mysterious as might be assumed." Their records, Bruce notes, "showed that very early in their careers, well before they had acquired any substantial measure of formal power or authority, they already were taking initiative, risking their careers and involving not only their subordinates but also their superiors in innovative projects of their own devising for which they had no explicit authority."
Bruce concluded his profile of Gray and a couple of other prominent leaders and how they showed budding promise by asking, "How many of today's CEO candidates have leadership without portfolio in their backgrounds? How many corporate directors hunting for a CEO can identify the candidates who do?" Harry J. Gray certainly fit this prized mold.
Posted by James Kristie at 8:24 PM