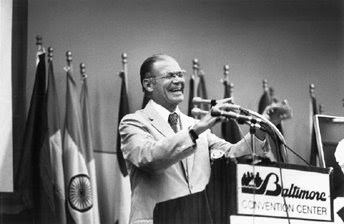 My enduring visual image of Robert McNamara, who died on July 6 at the age of 93, is a disturbing one — watching this steely-eyed Washington official on television in the 1960s presenting the latest body counts from the Vietnam battlefields. That said, I was nonetheless always fascinated by this complex man who undertook vastly complex schemes — waging war in Vietnam or, as World Bank president, waging war on poverty, or later in life, waging a kind of war to rehabilitate his image as the "architect" of the Vietnam conflict. In its lengthy obit, the New York Times called him "the most influential defense secretary of the 20th century."
He never seems to have waged war in the boardroom, however. He was a big-time corporate director who apparently served with distinction ... but exceedingly under the radar. There is virtually nothing in the coverage of his passing that details these public-company affiliations. And there is nothing in the public record by or about him that I am aware of that sheds any illumination on his corporate board service.
I know of McNamara's board affiliations because he and I had an exchange of correspondence in 1980s. Until I checked my archives, my memory was certain that I had invited him to write an article for Directors & Boards. But that wasn't it. At the time I was helping out as program chair for the Philadelphia Chapter of the National Association of Corporate Directors. What I did was invite McNamara to come speak to our group.
In unearthing my note to him, dated Jan. 27, 1986, I see that I wrote this:
"I had the very good fortune to be in the audience for your appearance before the World Affairs Council of Philadelphia's Conference on Strategic Defense and American Security. You gave us a terrific understanding of the 'Star Wars' concept and workings — or nonworkings, as I think you indicated for good reasons.
"My thought in inviting you to speak to our organization is that as a director of the Washington Post Co., Trans World Corp., Corning Glass Works, Bank America Corp., Royal Dutch Petroleum Co., and the Ford Foundation, we could look to you for a stimulating briefing on how you view the role of the board today and what you see as the major issues facing directors and managements now and in the years ahead. This is only a start in suggesting possible subject matter of mutual interest to you and our group."
In a polite and not unsurprising response, considering what his life must have been like with the above board affiliations, he wrote back:
"Thank you for your letter of January 27 and its invitation to speak before your Association. I wish I could accept. However, my schedule is so overcommitted, I cannot take on additional assignments. I am sorry and hope that you will understand."
Rather than the TV image of the cold, calculating, accused warmonger, I much prefer to hold this image of McNamara — as a distinguished and accomplished board director who undoubtedly dispensed great wisdom on organizational management and global affairs to his fellow directors and management teams. What a story he might have shared if we at Directors & Boards or the NACD could have gotten him to talk about being not an architect of war but of public company governance.
Posted by James Kristie at 11:16 PM