Lifetime Achiever — In and Out of Committee 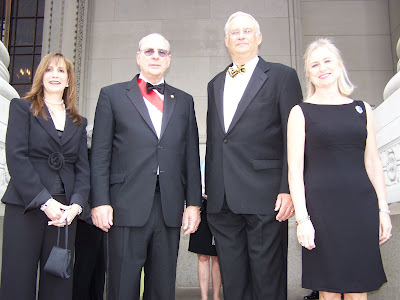 It's been a rough and tumble six months in the business trenches and corporate boardrooms. Directors have taken a lot of hard knocks. So let's end this month, quarter, and half year on a upbeat — with the pleasing news that our close colleague here at Directors & Boards has just been chosen by the National Association of Corporate Directors for one of its most prestigious awards.
Norman Augustine, retired chairman and CEO of Lockheed Martin Corp., is the 2009 B. Kenneth West Lifetime Achievement Award honoree. This award was created in the name of a former NACD chairman who was instrumental in bringing management, boards, and investors together to find common ground on issues of transparency, director independence, and corporate responsibility. Norm will be honored at the NACD's annual conference in October.
Norm is no stranger to awards, as you might imagine. He's pictured above, second from the left, when he was presented two years ago with the Bower Award for Business Leadership, a great honor bestowed by the Franklin Institute Science Museum in Philadelphia, for his leadership of Lockheed Martin and his extensive public service devoted to advancing U.S. science and technology leadership. (Photo by Joyce E. Santora, Main Line Life.)
Norm serves on the Directors & Boards editorial advisory board and has written several articles for the journal, all first-rate in their thinking and often laced with humor. The first article of Norm's that I published was back in 1987. It was a critique of committees, drawn from his book, Augustine's Laws (Viking Penguin, 1986). Here is a sample of Norm's wit and wisdom, elegantly combined:
• Committees have many phenomena associated with them. For example, the amount of time devoted to the debate of a subject is inversely proportional to the importance of the outcome. This is partly because the items with major consequence often have obvious answers ("Should we attempt a hostile takeover of Company X which is 50 times our size?"); whereas issues offering little basis for choosing between them naturally provoke disagreement ("Should the new cafeteria be carpeted or not?"). Furthermore, everyone is an expert on carpets — very few on hostile takeovers of industrial behemoths.
• Another mystery commonly observed by committee pathologists is that the time consumed in debate is dominated by those with the least to offer (and to do). How often, whether at a board of directors meeting or a neighborhood association meeting, has one been subjected to interminable discussion only to have the resolution under consideration pass unanimously?
• Committees have thus been dismissed, in the words of Harry Chapman, with the following epitaph, in the form of a series of rules: "Never arrive on time; this stamps you as a beginner. Don't say anything until the meeting is half over; this stamps you as wise. Be as vague as possible; this avoids irritating the others. When in doubt, suggest a subcommittee be appointed. Be the first to move for adjournment; this will make you popular — it's what everyone is waiting for."
Congrats to Norm on this upcoming award. The committee that chose him for this Lifetime Achievement honor must have flouted some of Augustine's Laws because it obviously knew what it was about and it accomplished a worthy result.
Posted by James Kristie at 4:21 PM