Up with the Uptick Rule 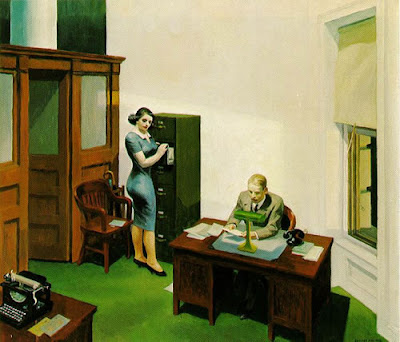 The Wall Street Journal is reporting this week that the SEC has been deluged by support for the return of the uptick rule — the trading rule in which there had to be an uptick in a stock's price before traders could short the shares. The agency put the proposal out for comment in April, and is receiving comments until June 19.
Boards and CEOs hate short sellers. I never met a CEO who thought his company's stock was priced correctly. And then, to think that there is someone out there who is betting against the stock strikes most as just beastly.
I have a comment to make about the uptick rule. It's something that I observed that never got the attention that it deserves. The uptick rule was suspended in July 2007. Shortly thereafter, the first big quakes happened in the market.
I remember it well. I took a vacation in August 2007 to Boston with my wife to visit an exhibition of Edward Hopper at the Boston Museum of Fine Arts. (Pictured is Hopper's "Office at Night," my favorite work by the artist, a reproduction of which hangs in my office.) That week in mid-August the market convulsed. I spent way too much time in the hotel room glued to CNBC watching as the market just dropped and dropped some more, and then dropped yet again. Unbeknownst to all, this was just the opening salvo of the market rout to come over the next 18 months.
I always drew a heavily dotted line between the lifting of the uptick rule and, in the immediate aftermath, the market's first big free fall. So I'm in favor of reimposing the rule. If the academics and their studies are right that the uptick rule has no influence in a stock price's downward spiral, then what's the harm in reinstating it? And if the rule does ameliorate the short-selling forces that would send a stock plunging, then let's bring it back, as there must have been a good reason to have it in the first place.
CEOs and boards will never be free from short sellers. But on the chance that this is a minor market adjustment that can restore some bit of rationality to how their shares trade, then this is one less thing for them to worry about. That's a good thing ... as there is plenty else going on in their governing lives at the moment to be concerned about.
Posted by James Kristie at 6:21 PM