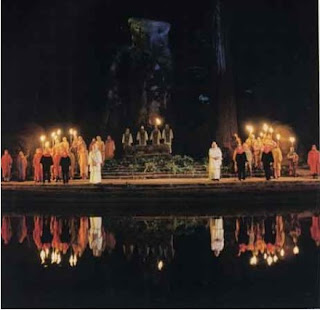 Supreme Court nominee Sonia Sotomayor is getting flak for her membership in the Belizean Grove, an elite all-women's club. As the AP reported, the Belizean Grove "bills itself as women's answer to the 130-year-old male Bohemian Club in California."
The Bohemian Club's Bohemian Grove activity (photo from past gathering) is a two-week retreat in July in the redwood forest where the rich and powerful in the business and public sectors come to play — and actually take in some enlightenment, too. According to this fact sheet, "There are speeches, known as 'Lakeside Talks,' wherein high-ranking officials disseminate information which is not available to the public at large."
Generally what happens at the Bohemian Grove stays at the Bohemian Grove. But one of these Lakeside Talks surfaced 25 years ago and came into my possession, sent to me by the gentleman who delivered it — a quite senior board member of several major industrial companies. With tongue not all that lightly planted in cheek, this corporate statesman delivered a volley of zingers at the Grove habitues. A sample:
"While not in the management manuals, here are a few tried and true ways that corporate leaders have developed and refined over the years to guarantee freedom from want.
"First, you appoint an executive compensation committee composed exclusively of outside directors. This allays suspicions from critics, and it is risk-free as long as the members are chosen with care. And, of course, you choose them.
"The next step is to have the compensation committee adopt a resolution stating, in effect, that in order to obtain, retain, and reward superior executive personnel it is the policy of the company to pay compensation above average competitive levels.
"Such a policy will never be successfully challenged. It is a 'motherhood' issue. The logic is unassailable. Good performance deserves above-average recognition. Poor performance requires above-average motivation.
"With this policy in place, the third step is to couple it with an annual survey of the compensation practices at your 'peer' companies, on the modest assumption that there are any. This is standard operating procedure and it virtually guarantees an ever-rising level of top-executive compensation."
There may be a double standard that's working overtime among Sotomayor's critics. That's bad enough. What's sadder to contemplate is that if the Belizean Club dispenses this kind of insightful counsel by the powerful and the privileged on the uses — and abuses — of power and privilege, how regrettable that Sotomayor is feeling forced to resign her membership.
Posted by James Kristie at 2:10 PM