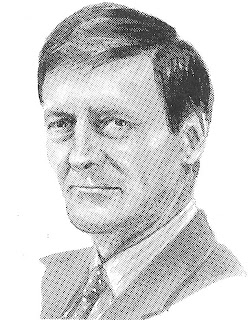 "Cadbury Vision Is to Stay Single" is the headline of a recent piece in the Financial Times covering the $16 billion bid by Kraft Foods for the British confectionary company. "Cadbury, On Its Own, Says Future Looks Sweet," chimed in a headline in a Wall Street Journal report today of the company's desire to swat away Kraft's acquisitive interest.
That desire is as true now as it was 18 years ago when Directors & Boards Publisher Robert Rock and I had a chat with Dominic Cadbury (pictured). He visited the journal's office on the way to giving a presentation to the Financial Analysts Society of Philadelphia.
He was group chief executive at the time of the company then called Cadbury Schweppes PLC. The three of us huddled to talk about the power of brands. The resulting interview appeared in a special 15th anniversary edition of Directors & Boards, themed "Being a Global Leader," published in the fall of 1991.
Here are two snippets from that interview that echo over the decades to the present stance being taken by both sides of this bidding interest (remember that Kraft has been in and out of Philip Morris):
• On the Prospect of a Takeover: "Philip Morris wanted to be a major global competitor in coffee. It bought Suchard, which gave them that opportunity. It also took them into confectionary. Will they decide to be a global competitor in confectionery? If so, everybody knows that they've got the cash flow to buy anything in the world. We're all public companies. Theoretically, they could say, 'Why don't we buy Cadbury Schweppes?' That would give them a very strong confectionary position in worldwide markets. I have no idea whether that could happen. My guess is that what it will come down to is, year by year, who does the best job individually of developing their business. If we do an excellent job of developing our confectionary business, my guess is that it would not be very attractive to somebody else to pay a huge premium to buy us."
• On the Value of Strong Brands: "The financial market has attributed over the last few years very high value to brands. It's so expensive and may become even more expensive in the future to build a brand name like a Cadbury. There is a scarcity value. I sometimes think it's a bit like old houses with attractive gardens in an attractive part of the countryside. There are a certain number of those in a country like Britain, and they are going to get fewer. The value tends to keep climbing higher. Brand names fall in the same category. It's going to be very difficult for anybody to build any of these brand names from scratch in the future."
"Build or buy (or, be bought)" is a board's perennial strategic dilemma. Cadbury-Kraft will be a dandy case of how two boards resolve this dilemma. We'll see if Sir Dominic's (he was knighted in 1997) words prove prescient. No matter how the deal jockeying proceeds, his thoughtful musing on the power of brands certainly stands the test of time — past, present and future.
Posted by James Kristie at 11:21 PM