Heroes Are All Around Us 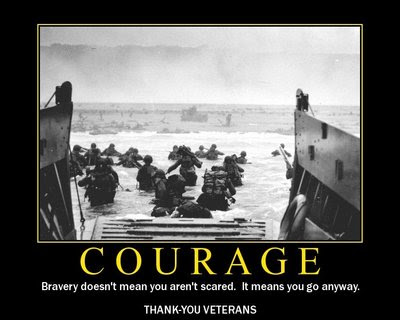 Veterans Day 2009. Memories stir of my service with the U.S. Navy. I am proud to have worn the uniform and to have given four years of my life to my country while the Vietnam War raged in the late 1960s and early '70s.
A few years ago my friend Bob Dilenschneider wrote a book titled A Time for Heroes, an exploration of the nature of heroism. Here is a passage:
"Some people define heroes as those who are willing to forfeit their lives for others. Like legal scholars who interpret the Constitution in a narrow way, these people might be considered strict constructionists: no sacrifice, no heroism.
"Myself, I'm a loose constructionist, if I may use that term. I believe in all manner of heroes.
"There are those who spend a lifetime in pursuit of a grand vision. Think of Nelson Mandela, imprisoned for 27 years before he triumphed over apartheid and became president of South Africa.
"Some heroes are intellectual pioneers whose ideas open up new territories of thought. Charles Darwin, Isaiah Berlin, and Sigmund Freud are examples.
"Others alert us to problems in our midst, like Rachel Carson, whose book Silent Spring warned of the dangers of pesticides.
"Some heroes motivate people to aim higher, perhaps to create a more equitable society or to actualize their own abilities.
"All of them have courage — the courage to dare, the courage to fail, the courage to persist."
Well stated, Bob. Count me as a loose constructionist, too. I believe that Corporate America's boardrooms are filled with heroes.
These are men and women who, largely out of public view, are attacking problems that are life-threatening to the enterprises that they are dedicated to protecting and preserving. Especially this past year, with the debilitating volleys that the Great Recession has hit boards with, there must be a legion of heroes taking their seats — hot seats — in boardrooms across the land, summoning up the courage to persist and prevail.
This is a good day to remember those who have worn the uniform of our country's military forces. And it's a good day to appreciate those who are showing courage in all its stripes, including those fiduciaries we call board directors.
Posted by James Kristie at 10:21 PM