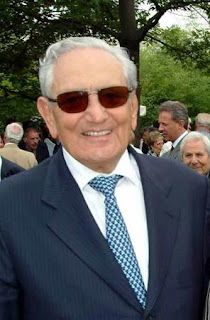 Close readers of this blog know of my admiration for Harold Geneen, the legendary leader of legendary conglomerate International Telephone & Telegraph Co. The incisive management mind of Hal Geneen has been cited regularly in this blog and in my editor notes for the Directors & Boards print journal and e-Briefing newsletters.
Thoughts again turned to Geneen when I read Rachel Sanderson's superbly reported and written Nov. 27th Financial Times profile of Michele Ferrero (pictured), patriarch of the Italian confectionary company that is in the mix over possibly bidding for Cadbury. Take note of this passage from Sanderson's story:
"He is still busy. Ferrero's latest invention is a dessert tasting of Sicilian lemons called Gran Soleil which, when put in the freezer and shaken, turns into a kind of ice cream. It was designed to be easily transported in China, India and Africa. In a rare interview, Mr. Ferrero told local journalists: 'You'll see, in 50 years time it will be as big as Nutella' " (another Ferrero invention).
What's so striking about that? Simply this: here is a company leader now in his 85th year (he was born in 1925, according to the FT article) doing some product line projecting five decades into the future. Is this not the rarest sighting in business today — a long-term thinker?
What's the Geneen connection? You'll readily see it in this anecdote told by David J. Mahoney, an impressive leader himself of the old Norton Simon Inc. juggernaut, who counted the ITT master builder among his most important influences. In an excerpt that I published from his memoir, Mahoney wrote of Geneen: "[He] always taught me to look forward. When I complained that a certain project would not pay out for 10 years, he replied, 'Yes, but it will pay out in 12.' He was 77 at the time."
Posted by James Kristie at 12:57 PM