Koz on the Cover 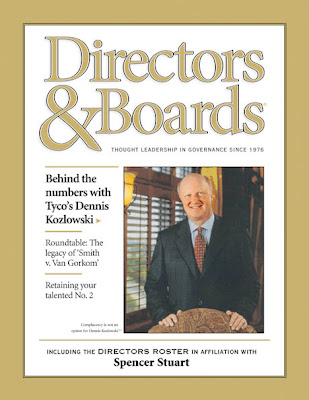 As I admitted in my editor's note for the March e-Briefing, I don't generally like to be reminded that I featured Dennis Kozlowski on the cover of Directors & Boards. This was back in the year 2000 — palmier days when the head of Tyco International was considered a paragon of good corporate governance. Not to hide in a crowd, but our cover story — a Q&A interview conducted by our lead columnist Hoffer Kaback — joined many other laudatory reports at the time on the dynamic growth of Tyco and the leadership qualities of its CEO.
Well, authors John Gillespie and David Zweig just gave me a big reminder of our Kozlowski spotlight when they cited it in their new book, Money for Nothing [Free Press, 2010]. At first I didn't know whether to be appalled or flattered. But the book is a good one. Its subtitle pulls no punches — How the Failure of Corporate Boards Is Ruining American Business and Costing Us Trillions. The book has gained traction, with admiring reviews in the Wall Street Journal and New York Times and other worthy spotlights, including an excerpt I am running in the Q1 edition of Directors & Boards coming off press later this week.
The authors called our Kozlowski material that they cited in their book "fascinating," and I return the compliment. Their jailhouse interview with the ex-Tyco CEO, which is the excerpt that I am publishing, yields several fascinating reflections on how it all went wrong between this CEO and his board. Three snippets from this book section:
• "Kozlowski said that he considered himself a victim of the times and a weak board. He felt he had become the poster boy for excessive pay in the wake of public anger over the Enron, WorldCom, and other scandals."
• "He said he got irate when thinking about the directors at his two trials who testified that they had been kept in the dark about his compensation: 'If they did not know what was going on, they certainly should have. I just don't buy that.' "
• "Kozlowski didn't think much of the Tyco board. 'I treated some of the directors as an afterthought because there's only so much time in the day. ... There were only two or three directors who, if they nodded yes, chances are the other directors were going to go along with it. I guess I should have been as diligent about selecting directors as we were about acquisitions.' "
Gillespie and Zweig draw from their interview with Kozlowski and their fuller analysis of what went wrong at Tyco an important conclusion: "It's clear that Kozlowski and his directors shared the same flawed relationships that have plagued so many other boards. For Kozlowski, the board faded into irrelevance compared to the power, prestige, and satisfactions provided by the acquisitions he engineered. Perhaps with a stronger board to keep his talents within legal bounds, Kozlowski today might still be on top of the world instead of washing inmates' clothes at the correctional facility."
On top of the world . . . and perhaps due for a return appearance on the cover of Directors & Boards — something that I would have been happy to arrange if things had not gone so amiss in the Tyco boardroom during these intervening 10 years.
Posted by James Kristie at 8:58 AM