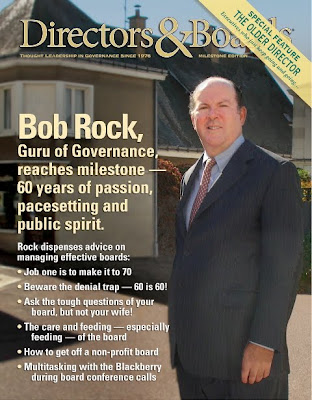 Directors & Boards Publisher Robert Rock celebrated one of those seminal birthdays this past week — the big 6-0. Our congratulations to him on his achieving this milestone with his usual cheerful aplomb and hearty humor.
Bob became publisher of Directors & Boards in 1988. It was the smoothest of executive successions — from father Milton, who spearheaded the purchase of the journal in 1980 and became its publisher at that time until son Bob's transition into the publisher's seat. With this new role came a new responsibility for Bob: to pen the "Letter from the Publisher" column in each edition. This is the publisher's chance to opine on the big issues of the day that may be vexing the country and its corporate leaders, and to point the reading audience to the higher ground.
For his first "Letter," in the Summer 1988 edition, Bob took on no less ambitious a topic than the state of American competitiveness. "Declarations of the decline in U.S. competitiveness have been echoing throughout corporate boardrooms, university classrooms, and Capitol Hill hallways," he noted. But he would have none of it.
With a forthrightness that would mark his succeeding Pub Letters, as we call them around the office, he identified the immediate need ahead now that the big purge of mid-1980s restructuring (often instigated by takeover types) was behind Corporate America: "The next round requires U.S. firms to enhance their competitive position in world markets by investing in education and training."
Then came the challenge. "The board of directors," he declared, "must make certain that appropriate, even aggressive, investments are made in the corporation's human resources. What will separate the leaders from the also-rans — companies as well as nations — in the world order of the 1990s is clear: the ability to marshal the best-trained and most highly motivated people, from the factory floor to the boardroom."
That was a darn good call for his first outing as pundit. (Think of the Internet Age that was just about to dawn.) And Bob certainly followed his own advice. In the 22 subsequent years in which he has topped the masthead of Directors & Boards as our publisher, he has invested much of himself — his time, talent, enthusiasm, support, and commitment — to ensure the journal's success and to make sure that Directors & Boards continues to play a seminal role in the education of corporate directors.
On behalf of all the staff and his many colleagues in business and boardrooms that he has touched through the pages of the journal, we salute him on this milestone birthday.
The specially designed mockup cover of Directors & Boards, pictured above, was crafted by the journal's longtime art director, Bill Cooke, for this celebratory occasion.
Posted by James Kristie at 8:27 PM