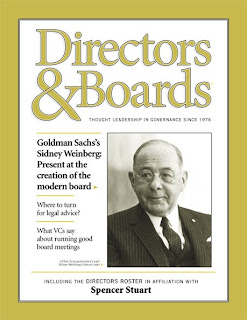 So, Lloyd Blankfein thinks the SEC's attack on Goldman Sachs is politically motivated and is telling clients, according to today's Financial Times, that it will "hurt America."
Sidney Weinberg must be spinning in his partner's office in the great beyond.
Weinberg is a renowned past leader of Goldman Sachs & Co. He joined the firm in 1907 and became chairman in 1930, heading it until 1969. His son John joined the firm in 1950, eventually rising like his father to head the firm as co-chair with John Whitehead from 1976-1984 and as sole chair until 1990.
Weinberg pere died in 1969, but he was the author of a cover story in the Summer 2003 edition of Directors & Boards. How that happened was that we got our hands on a remarkable speech that he delivered in 1949 to the Harvard Business School Club of Cleveland. He titled his talk, "The Functions of a Corporate Director." Why this speech is remarkable was the very reason I made it the cover story — I wanted to bring to a modern-day audience a "present at the creation" document that put forward how a public company board of directors needs to conduct itself for a progressive era of governance. It was everything the most assertive activist investor would want to hear.
I think of Sidney Weinberg, nicknamed "Mr. Wall Street" by the New York Times for his vast influence in his day on the banking business, spinning madly at Blankfein's assertion that the SEC is "hurting America" because here is what the distinguished banker warned in his 1949 speech:
"One must remember that every time a national corporation takes a step which is, or appears to be, against the public interest, it reacts on all corporations and is detrimental to our whole system of private enterprise."
The message, then, from one former Goldman chairman to his present counterpart: You are right about America being hurt, but are very wrong about the reason — it's not the attack on Goldman but what Goldman may have done to draw out the attack dogs.
Posted by James Kristie at 11:06 PM