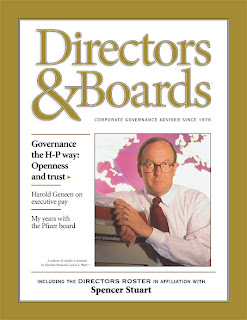 The HP boardroom has been full of sturm und drang for a decade, dating back to Carly Fiorina's arrival in 1999 as an outsider CEO. It may be hard to fathom after the recent tumult, but a steadier state did actually exist at one time.
Back in 1997 Directors & Boards caught up with then chairman and CEO Lewis Platt for a cover article he authored on "Governance the H-P Way." Platt was a lifer at HP, having joined the company as an entry-level engineer in 1966 and worked his way up to being appointed CEO in 1992 and chairman in 1993.
As I am continually reminded, words from the past have a way of echoing through the ages to resonate pertinently on present circumstances. I say no more but simply share with you the concluding paragraph of Lew Platt's article:
"A good test of whether your board is functioning well is if you can answer 'yes' to the question, 'Do I feel free to discuss anything with my board . . . to talk with full candor about anything that's worrying me?' I feel fortunate in this regard. Not all CEOs can say the same. For one reason or another, something goes wrong with the relationship between the CEO and the board, or between company management and the board, which leads to secrets, to a lack of trust, to poor board performance, and ultimately to poor corporate performance. My board has been very helpful to me with its perspective and advice, and our candid dialogue takes place in an atmosphere of mutual respect, which is the key to having a good board relationship."
Upon retiring from HP in 1999, Platt went on to serve as CEO of Kendall-Jackson Wine Estates and as a corporate director. Interestingly, he was nonexecutive chairman of Boeing Co. when its board in 2005 forced the resignation of CEO Harry Stonecipher over an affair with a company employee. Platt died later that year at the age of 64.
Posted by James Kristie at 9:48 PM