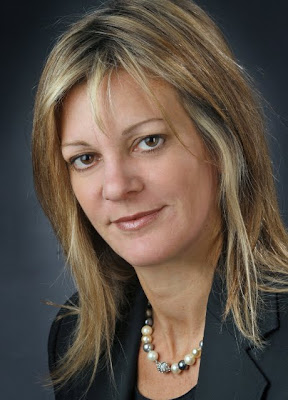 She's pretty — that's Katharine Weymouth, pictured at right, publisher of The Washington Post and CEO of Washington Post Media (and newly elected board member of the Washington Post Co.), who was the keynote speaker at a business leadership event in Philadelphia last week. But the report released at this event was anything but pretty.
The event was the unveiling of the annual survey of women on boards in the top 100 companies (by revenue) in the Philadelphia metropolitan region. This is a survey done by Philadelphia's Forum of Executive Women. The 2009 board composition tally was unveiled on Oct. 8. Here are some of the key findings:
• In percentages, women held 11% of board seats at Philadelphia's largest public companies, up slightly from 10% in 2008.
• In terms of the number of board seats, women held 90 of 844 total board seats at the 100 companies.
• 43 companies had no female board members.
• 8 companies had three or more female board members.
• 7 board seats were held by women of color.
The Forum survey also tallies women in the executive suite. There is no robustness in the numbers to be found there either:
• Women held just 11% of the top executive positions in 2009, the same representation as in 2008. That is, women were in 71 of the 645 top spots.
• 57 of the companies had no women among the top executives.
In reaching to find a "somewhat more encouraging" number, the Forum looked at five-year data. The meager finding:
• The number of women holding board seats increased from 84 in 2005 to 90 in 2009, a 7% rise.
• The number of women in C-suite positions increased from 62 to 71, a gain of 15%.
Concludes Forum President Ellen Toplin: "There have been some gains over time but the numbers point to a stubborn trend: While more women than ever are in the corporate talent pipeline, companies continue to tap mostly men for top positions."
Posted by James Kristie at 9:28 PM