Show of Support for Gender Quota on Boards 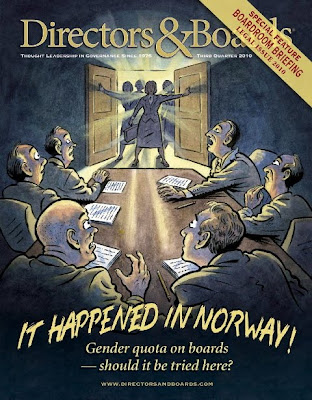 The majority of directors, both men and women, do not favor a gender balance quota on corporate boards. That is one of the major findings in a survey of nearly 400 male and female board members done earlier this year. The results were released on Oct. 6 at a briefing at the 21 Club in New York. The survey was conducted by Heidrick & Struggles International Inc., WomenCorporateDirectors (WCD), and Dr. Boris Groysberg of the Harvard Business School.
Now, here is who supported diversity quotas for boards: 25% of the women directors. And for the men? No surprise that it is a number that barely registers on the meter: 1%.
There were many other important findings that came out of this survey, which I will be citing in my blog and in Directors & Boards as time goes on. But this is the story that was buried in the overall report: That one-quarter of the women directors favor a board gender quota is an astonishing show of support for this controversial tactic.
This quota finding hits the market just as the new edition of Directors & Boards comes off press with our major examination of board gender balance and the pros and cons of a gender quota (front cover pictured).
A lead article offers up a Norwegian minister who walks the reader through his country's thinking on legislating a gender balance board quota and the process of how it got there — i.e., from women holding 7% of board seats in 2003 to today's mandated representation of 40%. That is quite a tale, one that is getting worldwide attention, providing the template for other efforts to institutionalize a quota system or contemplating a move in that direction.
Another article in this new edition takes our own informal poll on whether to mandate a board gender quota in the U.S. We asked a select group of directors, recruiters, and governance experts to write a brief essay attacking or defending the concept. Interestingly, that roundup of opinion mirrors the Heidrick/WCD survey.
"It is interesting to see in the survey and in our conversations with women directors around the world how the idea of quotas is gaining traction," says Alison Winter, co-founder and co-chair of WCD, which has over 700 members serving on over 850 boards in 27 global chapters. Look for more traction as this survey and the new issue of Directors & Boards roll out over the next few weeks.
Posted by James Kristie at 9:04 AM