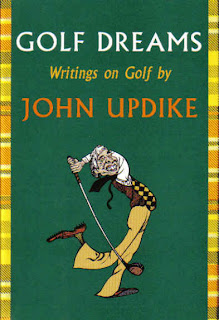 John Updike, who died a week ago on Jan. 27, almost made it into Directors & Boards. For the Summer 2007 edition, I was thinking of publishing a few of Updike's delightful observations from his book, "Golf Dreams." This would have made a fun sidebar to complement the article, "How to Get the Best Out of a Golf Outing" — a superb tipsheet for board members by Maureen Ryan-Fable, president of the event management firm First Protocol.
Well, I ran out of space. It's hard to believe now that I left Updike on the cutting room floor. Picture your humble blogger slapping himself upside the head.
As I look out my office window today and see blustery snow flying by sideways, I'm thinking what better way to remember the man of letters — and to transport oneself to a more welcoming clime — than to dip into Updike's paean to golf. Here are several snippets from his book that I originally intended to publish. You too might similarly enjoy them as February flexes its wintery fist:
•  "The difference between a good shot and a bad shot was marvelously large, and yet the difference between a good swing and a bad seemed microscopically small."
• "My once-or-twice-a-week golf games have been islands of bliss in my life, and my golfing companions, whose growing numbers now include a number of the dead, are more dear to me than I can unembarrassedly say."
• "Somehow, it is hard to dislike a man once you have played a round of golf with him."
• "Certainly the sight of our favorite fairway wandering toward the horizon is a balm to the eyes and a boon to the spirit."
• "As soon say life is too short for sleep as say it is too short for golf. As with dreaming, we enter another realm, and emerge refreshed."
• "For the hours and days it has taken from me, golf has given me back another self, my golfing self, who faithfully awaits for me on the first tee when I have put aside the personalities of breadwinner and lover, father and son."
• "Golf lengthens life."
It may well have for this renowned author. He died at the age of 76. I bet he was a splendid companion on the links. For a splendid read, pick up a copy of "Golf Dreams," published by Alfred A. Knopf.
Posted by James Kristie at 3:17 PM