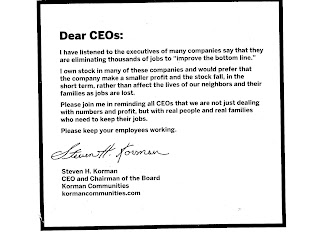 Here is something that I have never seen in 30-plus years of reporting on business — a CEO taking out an advertisement to implore his fellow CEOs to stop with the layoffs.
The CEO is Steven Korman of Korman Communities, a real estate development and management firm. The advertisement (pictured) may be too small to read, so here is the text of his appeal:
"I have listened to the executives of many companies say that they are eliminating thousands of jobs to 'improve the bottom line'
"I own stock in many of these companies and would prefer that the company make a smaller profit and the stock fall, in the short term, rather than affect the lives of our neighbors and their families as jobs are lost.
"Please join me in reminding all CEOs that we are not just dealing with numbers and profit, but with real people and real families who need to keep their jobs.
"Please keep your employees working."
(signed)
Steven H. Korman
CEO and Chairman of the Board
Korman Communities
kormancommunities.com
Applause, applause! According to Diane Mastrull's article in the Philadelphia Inquirer, Korman was catapulted into action when he heard Pfizer CEO Jeff Kindler say that he would eliminate 8,000 jobs prior to the intended acquisition of Wyeth. The article reports that, in addition to the advertisement, Korman will be sending his appeal by FedEx to Kindler and the CEOs of other companies whose stocks Korman owns.
As I noted in my blogpost below, Directors & Boards Publisher Robert Rock has made a similar case — that "CEOs must begin to think more about building businesses that secure and enhance employment," and that boards — and, especially, their compensation committees — should "underscore this notion by rewarding top management for retaining jobs and creating new ones." Read Bob's appeal, "Job One Is Jobs Won," here.
Two minds thinking alike — thinking about national security, i.e. "real people with real families who need to keep their jobs."
Posted by James Kristie at 3:33 PM