It Happened in Davos 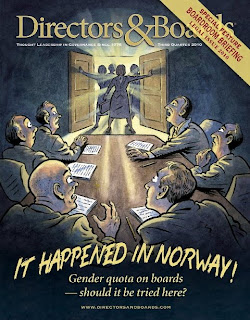 We had great success with our "It Happened in Norway" issue — in which we devoted a sizable chunk of the Third Quarter 2010 edition to exploring the provocative move toward mandated gender quotas for corporate boards of directors. The movement got rolling in Norway and has begun extending into other European corporate sectors, including France and Spain. That particular edition was widely acclaimed for its thorough and balanced treatment of this hot-potato topic and has almost sold out all overrun copies.
Well, guess who else is hot on the issue of gender quotas? The powers that be that run the World Economic Forum (WEF), underway this week in Davos. The best report on this development comes from the U.K.'s Guardian newspaper, in its article "Davos Imposes Gender Quota." Here are a few key pointers from the article:

• In an attempt to improve the traditionally dismal gender balance at this month's event, the WEF has for the first time imposed a minimum quota of women.

• The forum's "strategic partners" — a group of about 100 companies including Barclays, Goldman Sachs and Deutsche Bank — have been told they must bring along at least one woman in every group of five senior executives sent to the high-profile event. Strategic partners account for 500 of the 2,500 participants expected this year.

• Relatively few women have benefited from this high-level schmoozing. Women made up only 9-15% of those present between 2001 and 2005. Progress has been made — last year 17% were women.

• Critics may argue that one in five is actually a pretty small achievement, and real progress would call for two or three. Just finding one suitably senior candidate this year, however — given the gender balance in the global business elite — may prove enough of a challenge.

A challenge, yes, but surely one that can be met. If a country like Norway has found a sufficient number of women to populate the 40% mandated gender quota of its major corporations' board seats, then so can the comparative handful of pooh-bahs that descend on Davos.

Of course, the big knock on this Swiss schmoozefest (try saying that five times!) is that it is "more talk and partying than action." Which raises the interesting question: Would the right kind and number of women leaders even be inclined to mosey on over to the WEF shindig, mandate or not? But that is a gender-balance — or, should we say, gender-difference — question for another day.