'Awash in Liquidity' — Not! 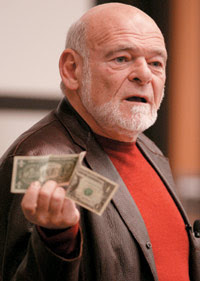 The Tribune Co. bankruptcy filing prompts a haunting flashback.
It is late 1988, and I am in a hotel conference room in New York listening to a presentation by a hotshot financier from still-existent Bankers Trust Co. Out of his mouth comes the first time I hear this expression: "The world is awash in liquidity." Well ... within a year the world begins its sickening plunge into the devastation of the early '90s. That excess liquidity did a vanishing act.
The flashback now fast forwards to early 2007. I open up the Wall Street Journal one morning to read real estate mogul Sam Zell (pictured), in an article by Alan Murray, saying that the world is experiencing "a massive excess of capital."
I start breathing hard. Did I just again hear a hotshot financier say that the world was awash in liquidity? My next move, of course, should have been to add to that excess capital by liquidating my equity portfolio.
Zell did it. He acted on his stated unease by unloading his Equity Office Properties Trust portfolio of commercial read estate holdings to Blackstone Group. For a big number: $39 billion. A brilliantly timed move. Promptly followed by a colossal blunder — buying Tribune Co., on the eve of the evisceration of the newspaper industry.
Alert to boards: The next time you hear the expression "The world is awash in liquidity," or any variation thereof, tell your CFO to run for cover. With the way things are going, it may be a long while before you hear it, but keep your ears tuned.
And I implore somebody to kick me if I don't do the same. No one wants to take a third called strike at this phantom fastball called "massive excess liquidity."
Posted by James Kristie at 2:35 PM