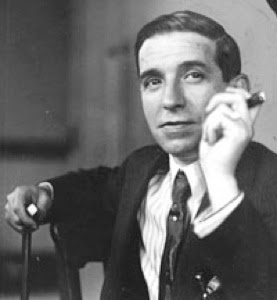 The Bernard Madoff investment scandal is being called one of the biggest Ponzi schemes ever or the biggest Ponzi scheme of all time. Naturally enough, since the shocking revelation of massive losses the names Madoff and Ponzi are linked at the hip.
I first became acquainted with Charles Ponzi (pictured) when I wrote a review of Famous Financial Fiascos, a book by investment counselor John Train, for the Philadelphia Inquirer in 1985. The Ponzi scheme — the pyramiding technique in which early investors get paid off with funds from succeeding waves of gullible latecomers — had a starring role in the book that recounted 20 of history's massive financial debacles.
What few people know is that Ponzi's original scam rested on a simple arbitrage proposition: Buy an International Postal Reply Coupon in a country with a devalued currency, redeem it in a strong-currency country, and pocket an immediate profit.
As I wrote in my review: "Why hadn't this foreign-currency play occurred to someone other than this small-time con man?" With the inimitable wit and style that marked not only this book on investment calamity as well as his other classic examinations of investment genius, Train answered, "Many of us have been struck by falling apples, but only Newton, rubbing the spot and glaring upward, derived the law of gravity."
Ponzi rode his scheme for big money for about a year until it, like all his namesake schemes since, collapsed of its own duplicity in 1920. But his name has lived on in infamy — and, like a ghost from the grave, has been again summoned forth in the horror wreaked by Madoff.
This year has been a ferocious bear market ... for trust. In so many boardrooms over the past 12 months, the trust factor has taken a huge hit. Does the board trust the management? Does management trust the board? Do directors or managers trust the investors? Do the investors trust the board and management team?
The Madoff affair is sure to feed more raw meat to that bear market in trust among men and women of business. That's the follow-on tragedy after the missing dollars are accounted for.
Posted by James Kristie at 4:08 PM