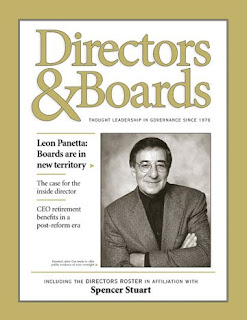 A past Directors & Boards author is in the news — Leon Panetta has been named by President-elect Barack Obama to be the next director of the Central Intelligence Agency. Initial reports hint that he may run into some flack in the approval process on Capitol Hill and within the intelligence establishment. Those criticisms, at least in regards to his governing philosophy, may be off the mark.
A reading of Mr. Panetta's cover piece he authored for the Winter 2003 issue should assuage any doubters as to his intentions to lead an agency that will be run with a responsive notion of accountability and, crucially, one that will earn the public's trust.
He was all about trust six years ago in his article. As a board member of the New York Stock Exchange, he had just served as co-chair of a committee that proposed important new post-Enron standards and changes in the governance of NYSE-listed companies.
His table-pounding thesis: It's one thing for boards to say that they are exercising proper oversight in the boardroom, but it's something else entirely to prove it ... and boards had better be thinking about how to prove it to restore the public's trust in corporate governance. "This is new territory for boards," he wrote in his article. "It isn't clear how far we will have to go — not to do our jobs well, but to make it apparent that we have done so."
Also this: "Can we end the long tradition of the boardroom as a sealed chamber from which we issue only unanimous endorsements of management's actions and results? Can we move toward more transparency about the boardroom process without undermining the ability of management teams to produce the results that shareholders want?" CIA vetters may want to read that last statement closely.
Panetta pointed the way to restoring the credibility of a vital institution — the public company board of directors. I'm rooting for him to bring his quest for accountability and trust to the CIA.
Come to think of it, with his board experiences and laser focus on improving corporate governance, why wasn't he the choice for the new head of another three-letter government agency — the SEC? We desperately need a restoration of trust there.
Posted by James Kristie at 7:56 PM