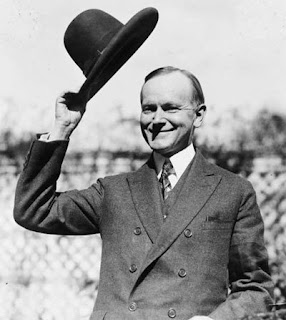 Not many people would put Calvin Coolidge on a list of great Presidential orators. Although historians note that he was an effective public speaker, Coolidge was, after all, nicknamed "Silent Cal."
But he did put forward one of the most stirring principles of achieving success — his call to "Press On." Here it is:
"Press on. Nothing in the world can take the place of persistence. Talent will not; nothing is more common than unsuccessful men with talent. Genius will not; unrewarded genius is almost a proverb. Education will not; the world is full of educated derelicts. Persistence and determination alone are omnipotent. The slogan 'Press On' has solved and always will solve the problems of the human race."
I have a nicely calligraphic version of this slogan hanging in my office. I also give a copy of "Press On" to all my Temple University students on the last day of class — to send them out into the world armed with a piece of wisdom for succeeding in the workplace and in life. A rendition of this slogan can be found here.
On this first work day of 2009, the view ahead looks 3D — i.e., a scale ranging from Difficult on the high end to Dismal in the middle to Dire at the far end. If there ever was a time to 'Press On,' this is it. It will take persistence and determination to emerge from the rubble of 2008.
I'd like to see Silent Cal's counsel imprinted on every board book that goes out this year and at the top of the agenda handed out at every board meeting. Let this be your mantra as you get your businesses back on the up-and-up.
Posted by James Kristie at 2:46 PM