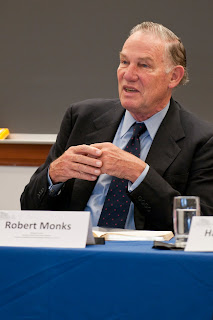 Before the Second Quarter edition of Directors & Boards rolls off the presses tomorrow, let me note a first in our 35-year publishing history — Bob Monks is the first person to appear twice on the cover of the journal.
Granted, we did not start picturing lead authors on our covers until 1996, some 20 years after the publication's founding. Yet, that makes his dual appearance all the more worthy of recognition.
Bob joined a melange of authors pictured on the cover of the Governance Year in Review special edition published in the spring of 2009, and then again some nine months later in the First Quarter 2010 edition, also in a photo montage of debaters on "The Great Divide" — our panel discussion on whether to separate the chairman and CEO positions. (Accompanying photo is from this debate held at the Weinberg Governance Center at the University of Delaware in November 2009.)
I first published Bob in 1989, a co-authored article with his longtime business partner and collaborator in shareholder activism, Nell Minow. Since then he has written frequently for Directors & Boards and has become a cherished colleague in advancing good governance. He can always be counted on for bringing clear thinking — and, I like to think, right-minded thinking — to the often complex issues of board leadership.
His most recent weigh-on on whether to separate the chairman and CEO roles is a perfect example of the cooly rational mind at work on one of the thorniest issues confronting boards today. It is an issue that he is personally close to — having bumped up against the daunting powers that be at ExxonMobil in presenting a proposal for the energy giant to make the split. He lost in that initiative. But let me share one of his keen comments made at our panel that is worthy of deep consideration as other managements, boards, and shareholders continue to wrestle with this "great divide":
"We are getting to the point now where the size of corporations is a major factor in the political and social life of countries. ExxonMobil, for example, a company that many know I have had a particular involvement with as an activist shareholder, is the 14th largest enterprise — and that includes countries — in the world. What corporations of that size do has a huge impact on society. They have to be concerned not only with meeting their numbers but also meeting their responsibilities to society. This raises very complicated questions for them — questions of global warming, questions of hiring practices in different parts of the world, and many other difficult issues. With the legitimacy of corporations constantly on people's minds, you need leaders who are sensitive to the company's impact on society. That requires a range of skills that is not impossible to find in a single person, but if you can't get that in a single person then that is another reason you may have to separate the roles at the top."
Well said — especially considering the less-then-deft treatment he received from ExxonMobil management in presenting his proposal, this is not a vituperative charge against the company but a statesmanlike projection of a future leadership requirement.
I trust we will have more opportunities to present the wisdom of Bob Monks to the Directors & Boards audience. That might even mean the prospect of a three-peat appearance on the cover.
Posted by James Kristie at 10:15 PM