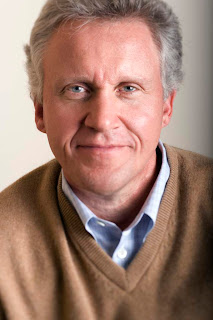 Memorial Day has particular resonance for me, being a proud veteran of four years in the U.S. Navy during the Viet Nam War era (although, thankfully, never setting foot in Southeast Asia). For a day of tribute like this one, I try to cite something special on this blog that appropriately ties in to the essence of the holiday. Here is that something special.
The following are a few passages from a speech that General Electric Co. Chairman and CEO Jeffrey Immelt (pictured) delivered at the U.S. Military Academy at West Point on Dec. 9, 2009.
From his intro: "First and foremost, let me tell you how honored I am to be here with you today. I've always been an admirer of West Point, and the character and accomplishments of its graduates. I'm awed by their heroism and self-sacrifice in the wars they've fought and the peace they've kept.
"West Point graduates are responsible for some of the world's greatest engineering feats. They've led some of the most important advances in aviation and medicine and information technology. They've founded colleges and businesses and charities.
"We have 11,000 veterans working at General Electric: 238 West Point graduates, and nearly 600 from all the service academies. We actively recruit from the military because we have learned that the values you bring to our company are essential to our success.
"A recent Gallup poll asked Americans: 'Who do you admire?' It will please you to know that the military finished first, with a 77% approval rating. Conversely, big business and Congress received approval from only 20% of our fellow citizens. People have lost faith in many big institutions. . . ."
And from his closing: "Like all Americans, I read about the sacrifices you and your colleagues have made in Iraq, Afghanistan, and around the world. And I am sure that all of you have friends who have been killed or wounded during the war.
"Their example, and the example of every American who stands in harm's way so that we may be secure in our freedom to build our businesses and follow our dreams and improve our lives, is the voice of our national conscience.
"Few of us will ever do what many of you will do for duty, honor and country. But America doesn't expect heroism from all of us. It does expect us to be good citizens of this country where no one's dreams are too big, a country that is defended so bravely by others. It expects us to honor the sacrifice made on our behalf by making the best use of the freedom you protect. Wherever our talents lie, and whenever our conscience requires, we must all, to the best of our abilities, help keep America the great force for good it has long been. We are trying to do that at GE.
"America is at a turning point. The U.S. military defends our freedom to succeed, and your values will help to direct our renewal. It has been a great privilege to talk with you."
And for me, on this Memorial Day 2010, a great privilege to share Mr. Immelt's remarks.
Posted by James Kristie at 6:33 AM