The Board Equivalent of 'Mission: Impossible' 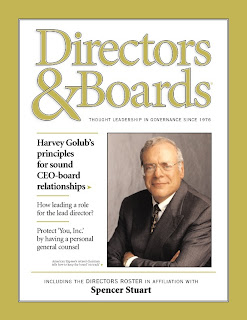 I wrote about Harvey Golub being elected to the board of AIG back in May of this year when his nomination was announced. At that time I revisited a past cover story he authored for Directors & Boards and highlighted several of his beliefs about best-practices board leadership that seemed particularly pertinent to the AIG setting — including this one: "Never surprise the board. Never ask it to vote on a complicated issue without explaining its nuances and risks." My conclusion at that time was that AIG was fortunate to have him as a new board member to help it emerge from the rubble, if such a feat is possible.
Well, Mr. Golub, who retired from American Express in 2001 after seven years as chairman and CEO, has now been named chairman of AIG. That's cause for even greater optimism for the chance of a reemergence of this once-mighty firm. "Harvey Golub is one of the most experienced and respected executives in the financial services industry today, known for his leadership, integrity, and business acumen," said outgoing AIG Chairman Edward Liddy of his successor.
On this auspicious occasion, I can't help but dip back into that article for some more archival Golub wisdom on board practices. As an example of his frankly confronting the toughest of challenges, he addressed what many chairman, CEOs, and directors have found to be a "third rail" in the boardroom — trying to get rid of a director. Here is what he had to say:
"Sometimes a board member just doesn't work out. He or she does not focus on the major issues, or fails to devote sufficient time, or is unable to work with the rest of the board in a collegial fashion. How to deal with this problem?
"More often than not, trying to remove a board member smoothly is the corporate governance equivalent of 'Mission: Impossible.' It is one of the more divisive steps that one can take on a board, one that can poison an atmosphere so as to not make it worth the effort.
"The one time I found that the American Express board was having a problem with a director, I discussed the issue with a senior board member. We talked about the options for dealing with that director, and both of us concluded that seeking his departure from the board would not be worth the internal difficulties it would cause."
That's a candid admission. He writes in his article that he favors either time limits or age limits as a way to address the problem. Some shareholders might not be happy to know that a board is tolerating an underperformer and is just waiting him or her out. But board effectiveness demands a degree of board collegiality. And board chairman survival requires not stepping on any third rails ... or taking on, as Golub calls it, a "Mission: Impossible."
This from the fellow who just became chairman of AIG. "Mission: Impossible," anyone? We stay tuned in.
Posted by James Kristie at 7:25 PM