'Mad Men': The Board Invitation Scene 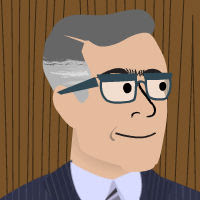 The TV series "Mad Men" returns today for its third season. I am a fan — I like the show's 1960s milieu and ad agency setting. The '60s was my coming of age decade, and one of my early jobs was in an ad agency. Not all of the show's plot lines grab me, but when the episodes turn their attention to the conduct of business, the writing and acting can be surprisingly on the money.
As in this scene from last season. Listen in. The three principles involved are Don Draper, the ad agency's creative director, and Roger Sterling and Bertram Cooper, the agency's two senior co-partners. After his role in winning a lucrative new account, Martinson's Coffee, for the agency, Draper is summoned to a meeting with the two senior partners.
Cooper: "Sit with us."
Draper (sits down in a chair facing them): "Thank you."
Sterling: "Jim Van Dyke of Martinson's Coffee was thoroughly impressed. He's inviting you to join the board of the Museum of Early American Folk Arts."
Draper: "That's nice. What is it."
Sterling: "It doesn't exist yet."
Cooper: "But I've seen the opening exhibit. Whirlygigs" (waves hands).
Draper: "Do they need a campaign?"
Cooper: "No. Philanthropy is the gateway to power."
Draper: "If you say so."
Sterling: "We need you to continue your excellence in advertising, but also to start treating this like part of a bigger business, which it is."
Draper (looking a bit puzzled): "I will."
Cooper: "Do you understand what this means? You're going to be wearing your tuxedo a lot more. It's time for the horse to catch the carrot."
Cooper asks Sterling to leave the room. Then the senior statesman of the firm (wonderfully played by Robert Morse) draws Draper into his most paternal confidence.
Cooper: "Would you agree that I know a little bit about you?"
Draper: "A little."
Cooper: "There are few people who get to decide what will happen in our world. You have been invited to join them. Pull back the curtain ... and take your seat."
From a pop culture TV show, an unexpected insight about governance: a board invitation as recognition of one's arrival at a new stage of leadership and as entree to a whole new sphere of influence.
The illustration above, thanks to an interactive feature of the show's website, is yours truly — my personalized icon as a "Mad Men" character.
Posted by James Kristie at 1:35 AM