Stephen Cooper on Why CEOs Fail 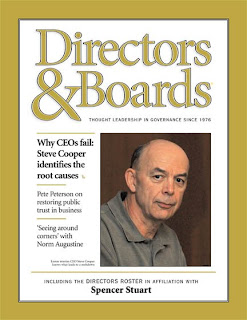 Stephen Cooper has just parachuted into yet another troubled situation — Metro-Goldwyn-Mayer Inc., where he will be helping to lead a recovery of the film studio. This "turnaround guru," as the Wall Street Journal called him, has made several appearances in the pages of Directors & Boards, most notably as a cover story author in 2002 with his article,"Why CEOs Fail."
It appears from the initial reports of the ouster of MGM CEO Harry Sloan that the challenge ahead is a balance sheet one, trying to get out from under a mountain of debt piled on in an LBO five years ago. But in reviewing Cooper's article, in which he laid out what he termed "the six key factors that can lead a company into troubled waters," it's worth highlighting the one that, of all six, he reserves special mention:
"By far the single most critical factor responsible for CEO failure is management denial. It is not unusual in my business to receive a call midweek from a company that suddenly finds itself unable to meet Friday's payroll. How does this happen at large, multinational companies run by skilled people, who presumable have operating and financial controls in place?
"In my experience, surprises of that magnitude are fueled by an ongoing management mindset that leans on reactive excuse-making rather than proactive ferreting out of problems.
"Ironically, it can be a company's very success that lulls a CEO into complacency. And in complacency are sown the seeds of mistaking symptoms for causes, shunning bad news, and avoiding tough decisions."
Cooper was serving as interim CEO of Enron Corp., heading that historic salvage operation, when he wrote those words for us. MGM is no Enron, but it is yet again a prominent example of what Cooper says he has seen over and over in the many "meltdowns" he has worked on — "a combination of systemic flaws, strategic errors, and human failings ... exacerbated by weaknesses in current corporate governance practices."
I wish him well in the MGM revival, but something makes me think there won't be a lot of new lessons learned in this turnaround. He, and we, have seen this picture before. It's called "Why CEOs Fail."
Posted by James Kristie at 10:58 PM