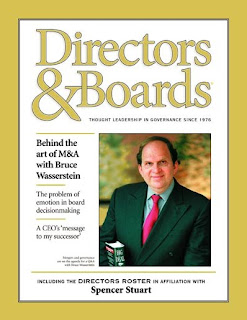 So sudden — the death of investment banker Bruce Wasserstein yesterday at the age 0f 61. Tributes to his colossal impact on M&A dealmaking have been made in the Wall Street Journal, New York Times, Financial Times, and other publications.
Directors & Boards visited with Wasserstein in 1999, when he sat for a cover-story interview with our lead columnist Hoffer Kaback. Over the course of nine pages of sharply conducted Q&A, Wasserstein gave a peek into his playbook for getting a deal done.
Of all the tips and tactics discussed, there was one practice of his that he talked about that is ideally suited for helping boards in all their decision making, not just with M&A.
When the conversation turned to his admiration for one of his Harvard Law School professors, Lon Fuller, Wasserstein said this:
"I admired him both in an ethical sense and for the way he was able to shave an intellectual problem, if you want to put it that way, and look at it from many different points of view. A prism of fact, if you would. And I guess I was attracted to that way of thinking.
"He had an expression, 'Well, let's think about that.' Someone would come up with the obvious answer and he'd say, 'Well, is that right? Let's think about that.' And that's what I try to do with the people around here. You get a young, bright guy who says, 'We're going to do this to solve that.' Maybe he's right. I don't know. 'Well, let's just think about that.' I find that taking that little extra time to think about something is helpful when everyone's in a big rush."
Powerful advice for boards. In the heat of the action, when management is raring to go down a particular path, how much better a decision will be made if one or more of the directors bats back with a "Well, let's just think about that"?
Posted by James Kristie at 8:54 AM