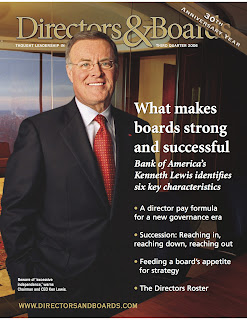 With the sudden resignation of Ken Lewis, the Bank of America board now faces a classic succession crisis: the much earlier-than-foreseen departure of an iconic CEO, with no clearly defined and vetted successor ready to step in. And this is happening at one of the most important financial institutions in the country and to the country, in terms of helping the capital market system return to full and fair functioning.
The New York Times calls it "a remarkable boardroom drama," and describes the directors as being "stunned by the turn of events."
Take heart, BofA board members. Your own CEO offered some sound advice on what to do in such a situation. Here from an article by Ken Lewis published in Directors & Boards in 2006:
"Directors must have grace under pressure. Given the regulatory environment in which we now operate, the likelihood that your company will face an issue at the board level at some point during your service — related to accounting, disclosure, compliance, an ethics breach, or something else — is high. Directors must accept that issues arise in all organizations.
"What distinguishes companies is how managers and directors respond. The first job of a director is to keep a level head, get the facts, and give management the opportunity to take appropriate action. It is only when management fails to act, or to acknowledge the issue, that directors must act decisively and hold management accountable. Figuring out which situation the company is in — and when directors need to take independent action — may not always be easy. But it's the most important judgment directors will ever be called on to make."
At the time he authored those words, there probably was no stronger or more highly regarded CEO in the country. The intervening years have not been kind to the man or his reputation. This particular piece of wisdom, originally dispensed to be a best practice to boards generally, has applied in a most particular way to his own board over the past 18 months, what with the near collapse of the financial system, the TARP funding, the Countrywide and Merrill Lynch purchases, the Merrill bonuses, the Paulson/Bernanke gangtackle, and other "issues at the board level." (Some of those directors, in fact, can no longer keep a level head, seeing as their heads were lopped off a couple of months ago in a board putsch.)
And now, with Ken Lewis dropping the "early retirement" bombshell on them, the BofA directors find themselves yet again having to embrace their beleaguered leader's advice to "keep a level head."
Posted by James Kristie at 6:36 PM