Juanita Kreps: No Napping for Her 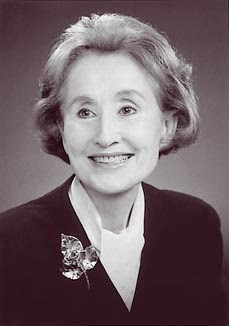 I found in my archives a funny story Juanita Kreps told to Forbes magazine in 1976. She was sitting in a corporate board meeting during a complicated financial discussion. An elderly fellow director was beside her, napping peacefully. "Just as the vote was to be taken," she said, "he woke up and proceeded to explain the issue to me!"
Such was life for women on boards in that pioneering decade.
Kreps, who died on July 5, had some notable firsts that she leaves behind as her legacy. She is perhaps most well known for being the first woman to hold the position of U.S. Secretary of Commerce. She was Jimmy Carter's Commerce Secretary from 1977-1979. As the New York Times noted in its obit, not only was she the first woman but also the first economist (she was a professor of economics and vice president of Duke University) to hold this Cabinet post.
When she was appointed in 1972, she was the first female director of the New York Stock Exchange. And when you look at the impressive list of corporate boards that she served on, likely she was the first woman director to be welcomed into certain of these boardrooms: American Telephone & Telegraph Co., Armco Inc., Chrysler Corp., Citicorp, Deere & Co., Eastman Kodak Co., J.C. Penney Co. Inc., RJR Nabisco, UAL Corp., and Zurn Industries.
Another first: When the National Association of Corporate Directors inaugurated its Director of the Year Award in 1987, Juanita Kreps was the chosen one. That was a progressive call on the part of the NACD to institute this award by recognizing a prominent woman in the boardroom.
She seems to have been the right woman at the right time for her government, business, and academic engagements. But more than anything related to gender, as the NACD award attested, she brought "gold standard" thinking into the boardroom. Here is a key observation Forbes reported about her back in the mid-1970s:
• She says she's on the board to make management talk about things they would otherwise overlook. "Our job is not only voting on questions brought before the board," she observes, "but deciding what subjects to insist on discussing." There is just one thing that bothers her: "The trouble isn't whether you have the courage to raise the issues. Where you might fall down in your obligation to stockholders is in not knowing enough about what's going on to make an intelligent decision."
Boards at their best — that was Juanita Kreps.
Posted by James Kristie at 6:29 PM