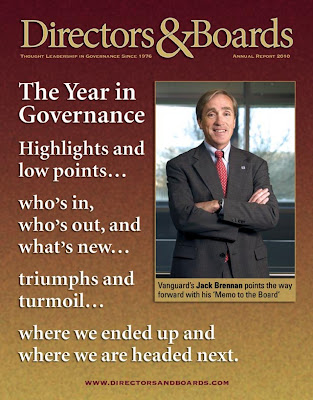 The fourth annual Year in Governance special edition of Directors & Boards just coming off press (cover pictured) is a document that records for posterity the next momentous attitudinal shift that will drive governance in the era ahead.
As you might imagine, there have been a lot of shifts that have taken place in corporate governance.
A big one early in my three-decade tenure as editor of Directors & Boards was the shift to a board composed of a majority of independent directors. It was not uncommon in the early 1980s to see many insiders sitting on boards. Those of you who share with me a little gray hair may recall that in 1978 Johnson & Johnson was threatened by the NYSE with delisting unless it opened up its board to independent directors.
Here are a few other shifts that have taken place over the past 30 years:
• More women being added to corporate boards.
• The adoption of executive sessions of the board.
• The embrace of the lead director concept.
• The increased splitting of the chairman and CEO positions.
• Greater usage of search firms in recruiting directors.
• The change in scope of the nominating committee of the board to a broader-gauge corporate governance committee.
• Vastly expanded purview of the audit committee.
• Much more box-ticking, instigated by court cases like Van Gorkom and Caremark and legislation like the Foreign Corrupt Practices Act and Sarbanes-Oxley.
• A reining in of "overboarded" CEOs and other types of directors.
I could go on and on. But what I would be going on about are what I consider process shifts. Much rarer have been attitudinal shifts — a revision, revolutionary rather than evolutionary, in the mental construct of the role of a director and the role of the board.
In 2006, at the annual conference of Yale University's Millstein Center on Corporate Governance and Performance, I heard former SEC Chairman William Donaldson identify perhaps the most momentous attitudinal shift taking place in the boardroom in the past half-century when he remarked: "It used to be said that it's the CEO's board; now, it's the board's CEO." That was a big and bold statement.
Here is the next momentous attitudinal shift that will energize governance in the coming era. It is pinpointed by Vanguard Chairman Emeritus John Brennan in his keynote article for the Governance Year in Review issue: "There has been a great attitudinal shift in boards away from what is right for the insiders to what is right for the shareholders."
That is huge. You might say that this should have been the mental construct of the board all along, but obviously when we look at board decision making in executive compensation, M&A, management performance and succession, capital investments, and other metrics, it can be a hard case to make that what many boards do is right for the shareholders.
Shift happens. And if Jack Brennan and many of his peers in the investor community are right, it is happening now.
Posted by James Kristie at 10:07 AM