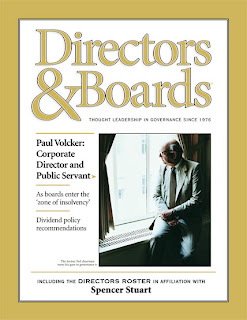 The Dodd-Frank Bill signed today by President Obama incorporates what most legislators and market participants would admit is a watered-down Volcker Rule — the former Federal Reserve chieftain's proposal on restricting proprietary trading by banks.
Bank CEOs are glad about that, but what they might really be glad about is that another Volcker Rule did not get written into the legislation: a mandate to separate the chairman and CEO positions at banks and financial institutions.
"My favorite idea on corporate governance is that I like the idea of separating the chairman and chief executive officer" Volcker told Directors & Boards lead columnist Hoffer Kaback when being interviewed for a cover story in the journal in 2000. Here is more of what he said:
"Chief executive officers like to be chairmen. There's no question about that. But, most specifically, when a company gets into trouble, and if there's some question about the CEO in terms of his tenure, responsibility, the need for new blood, or whatever, it's just much more difficult to make the change when you don't have an alternate source of leadership on the board other than the chief executive himself.
"A bank gets into trouble. As the bank regulator, you at least raise the question whether part of the trouble isn't the management. Who do you talk to without using a two by four? You look for some leadership in the bank to change policies or change direction, and board members say, 'That's not me. I don't have any responsibility. All I am is a poor board member. Go to the chairman.' Well, the chairman is the problem."
Volcker did not think much of the lead director as an alternate source of board leadership — "in a lot of situations it may be a second-best solution." The best option, one he liked both as a regulator as well as a director — he was at the time of the interview with the James Wolfensohn boutique investment bank and serving on several corporate boards — is separating the top roles.
His firm conclusion: Having "a [nonexecutive] chairman who can set the agenda for the board and stay in close contact with the chief executive, and be simpatico but nonetheless bring independent judgment that doesn't always come out very clearly in a board meeting because of the collegiality involved and the reluctance to speak out, is useful."
Bank chairmen-CEOs may feel they dodged a bullet on the Volcker Rule's intent to separate out their proprietary trading arms. Little do they know what kind of bullet they dodged had a Volcker Rule to separate their titles been embedded into the Dodd-Frank Bill.
Posted by James Kristie at 6:34 PM