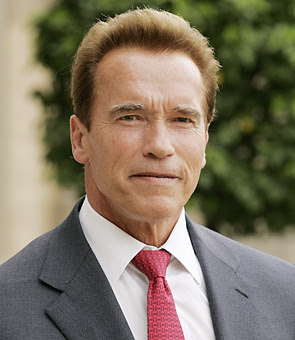 Esther Dyson, longtime IT maven, VC investor, board director, and cosmonaut in training, among the many impressive dimensions of her life, just posed an interesting question to her Facebook network: What should/will Arnold Schwarzenegger's next career be?
Some of the responses were on the level — "executive producer of various movies," "the international 'kick ass' guy on climate change and clean energy," and, citing his "great role" in "Kindergarten Cop," an FBer suggested, "Maybe a next gen of teacher, especially with young kids." Then there was this possibility: "Isn't his ultimate ambition to run for President?"
Of course Esther's query stimulated a few jokesters: "What was his last career? Bankrupting a state?" And this Conan-themed response: "Do we even have to ask? It will be to crush his enemies, to see them driven before him, and to hear the lamentation of their women."
I chimed in, too, with this suggestion: "How about a corporate director? Lots of possibilities — a media company, a defense contractor, even WWE." To which I added, "Then I get to interview him." I was only being somewhat playful, especially with the cite to World Wrestling Entertainment Inc., when I posted this to Esther's FB page.
But, actually, why not consider Arnold for a board seat?
Any other two-term governor of a major state — and remember that California's economy is the largest in the nation and the eighth-largest in the world — would get a serious lookover by board nominating committees and recruiters.
It was then, with a few curious clicks of the mouse, I discovered that there is, of all things, an opening on the board of WWE. Michael B. Solomon, a managing partner of Gladwyne Partners LLC, announced earlier this month (with no reason given) that he was stepping down from the board. The investor had been on the WWE board since 2001.
So, gentlemen and ladies of the WWE board nominating committee, start your engines!
And if Arnold does turn up in our Directors Roster as a newly elected board member somewhere in corporate America, I will indeed endeavor to line up an interview for a Directors & Boards article.
This is a bit of a fun blog post to kick off Thanksgiving week — a week that I hope finds the Directors & Boards audience in a thankful mood for having survived a year that brought us a plethora of new SEC rulings on governance disclosures and a year that also brought us Dodd-Frank. More than a few directors might well feel like asking: Where was The Terminator when we needed him!
Posted by James Kristie at 8:54 AM