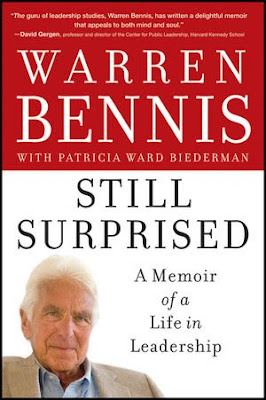 Being a veteran of the U.S. Navy, this day has great meaning for me. Here is a tale of battlefield leadership that has just made a big impression on me that I want to share as we celebrate our country's past and present servicemen.
It comes from a new book by Warren Bennis, who has distinguished himself in so many ways over a long well-lived life — in leadership positions in academia both as teacher and administrator, as an adviser and consultant to companies, and as an author (of 30 books!) and thought leader in the art and science of management. His book is titled, "Still Surprised: A Memoir of a Life in Leadership" (published by Jossey-Bass).
That life in leadership started early. Here he is as a young officer leading a platoon of soldiers on the front lines "in the final throes of the Battle of the Bulge, that murderous last-ditch effort by the German military," he writes. There is no way to effectively paraphrase Bennis' tale, so here it is in his own words (copyright by the author):

In the field, one of the dangers our G.I.'s faced was a horrible condition called trench foot. For their march across Europe, the men had old-fashioned leather boots, not the rubberized ones that would be standard issue later. Their boots and socks would quickly become soaked through as they slogged through the snow. In a vain attempt at keeping their boots dry, they would wrap them in burlap sacks. That only kept the moisture inside, making the situation worse. Soon their feet would become infected. If they weren't tended to properly, their toenails fell off, their feet eventually turned black, and they developed gangrene. Frostbite might cost you some toes, but trench foot cost soldiers their feet, even their legs. The problem was enormous, especially for those soldiers stuck in water-filled foxholes for weeks at a time. Stephen Ambrose writes in "Citizen Soldiers" that in the winter of 1944-45, 45,000 American fighting men had to be taken off the front lines of the European Theater of Operations because of trench foot.
Some officers thought the men were goldbricking, getting trench foot on purpose in order to be relieved of duty. Given how agonizing and potentially crippling the condition was, I found that hard to imagine. I had been warned of the seriousness of trench foot by one of the doctors back at the regiment's makeshift first-aid station. He said that the only way to avoid it was to take off your boots and socks, wash your feet, and then dry them carefully, toe by toe, preferably by a fire.
Given the bitter cold and the men's ambient level of exhaustion, they were loathe to bother with this complicated nightly toilette. After all, it meant heating water from their canteens in their helmets, draping their wet socks around their necks to dry overnight, washing and meticulously drying their feet, then putting dry socks and their boots back on. But I had taken the regimental doctor's warning to heart. Other companies were losing a lot of men to frostbite and trench foot. I decided I would preach the gospel of meticulous foot care to my men. My crusade didn't have a heroic ring to it, but it would serve two important purposes: it would save the men from suffering, and it would limit the company's losses to those caused by German snipers and other perils we couldn't avoid.
This wasn't the kind of campaign you could wage by fiat. Every night I would go from squad to squad, making sure each man took off his boots, washed his feet, dried them carefully, and put on dry socks before he put his boots back on. And my initiative did what it was supposed to do. None of my men got sent back because of trench foot.
In retrospect, it is one of the things I am most proud of doing during the war. It sounds compulsive, even fussy, but it was an example of an officer fulfilling one of his most important obligations — taking care of his men. To this day, I think of those soldiers every morning after I shower and carefully dry between my toes.

A powerful story of leadership, no? It is just such displays of care for their country and their fellow comrades by veterans like Warren Bennis that we honor on this day.
Posted by James Kristie at 9:14 AM