The Dancing Board Member 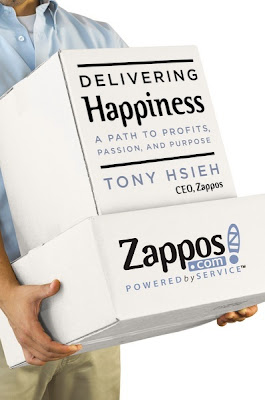 The holiday shopping season is off to a rousing start. Crowds were strong on Black Friday, and it appears Cyber Monday set new records.

There can be a governance angle in almost anything. When Y&R consumer expert John Gerzema announced in mid-November that he expected Zappos.com, the online merchandiser of apparel and footwear, "to win the online shoe retailing war with its celebrated customer service" this shopping season, I was just reading Zappos.com Inc. CEO Tony Hsieh's book, Delivering Happiness: A Path to Profits, Passion, and Purpose [Business Plus, 2010].

Here is a choice story he tells in the book. Before becoming CEO of Zappos.com, Hsieh headed LinkExchange, a Web design company he cofounded in 1996. That's where this story takes place:

I’m not quite sure how it started, but we had a really fun tradition at LinkExchange. Once a month, I’d send an email out to the entire company letting them know that we were having an important meeting, and that some of our important investors and board members would be attending, so everyone was required to wear a suit and tie on the day of the meeting.

Everyone except for the most recently hired employees knew that it wasn’t a real business meeting, and that they didn’t actually need to wear a suit and tie. The real reason for the meeting was so that we could initiate and haze all the new employees who had joined LinkExchange in the past month.

So once a month, all the newly hired employees would show up to the office dressed up in suits and ties. There they would realize that they were the target of the companywide practical joke. In the afternoon meeting, all the new hires would be called up to the front of the room to complete some sort of embarrassing task.

After an investment by Sequoia Capital, we asked Sequoia partner and our new board member Michael Moritz to attend our initiation meeting, and we called him up to the front of the room along with the other six employees who had been hired in the past month.

After each person introduced himself, we let them know that in honor of Moritz’s presence, we decided that we wanted everyone to move together in unison to the music that was about to be played.

If you’ve ever read anything in the media about Moritz, he’s generally portrayed as an intelligent, introspective, and proper British journalist-turned-venture-capitalist, so everyone was excited to see that he was willing to stand in front of the room with the other new employees. Someone brought out a boom box and turned on the power as everyone started clapping and cheering. And then music started playing. It was the Macarena.

I don’t think that words can every truly describe what watching Moritz being forced to do the Macarena was like. It ranks up there as one of the strangest sights to behold. Everyone in the entire room was cheering and laughing, and by the end of the song I had tears streaming down my face from laughing so hard.

I remember looking around the room at all the happy faces and thinking to myself, I can’t believe this is real.

Two years after cofounding LinkExchange, Hsieh sold it to Microsoft for $265 million. He then guided Zappos from almost nothing to over $1 billion in gross merchandising sales annually, and got it onto Fortune magazine's "Best Companies to Work for List." And then along came Amazon, which bought Zappos in 2009 for $1.2 billion.
This is an impressive case of how creating customer value creates shareholder value, but maybe Tony Hsieh is on to a new tactic for how a board can help create shareholder value — get the directors up dancing in front of the team.
Posted by James Kristie at 5:40 AM