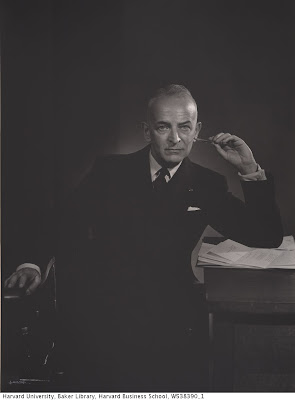 I first became aware of Gen. Georges Doriot — a famous Harvard Business School professor who is widely acknowledged as the founder of the modern-day venture capital industry — during a conversation with Barbara Hackman Franklin. I was interviewing Barbara for the "Oral History of Corporate Governance" special 25th anniversary issue of Directors & Boards published in 2001, and this was one of her remembrances:
"I certainly don’t recall corporate governance included in any studies at Harvard, although I still find it amusing today to remember that a course taught by one of the most esteemed members of the faculty, Gen. Georges Doriot, was closed to women. We were warned by our counselling professors not to try to sign up for that course because he didn’t take women. When I ran into him many years later, I told him I had wanted to take his course, and what did he think about not allowing women in his class. He looked right at me and said, 'I’m damn proud of that!' ”
Barbara was a good sport and laughed about it when we talked, but I am sure it was not a laughing matter at the time. As one of the first women to graduate from Harvard Business School (which she did in 1964), she and other high-achieving women missed out on taking a class with this renowned individual. As the New York Times stated in its obituary when the General — as he was universally called because he had been a brigadier general in the U.S. Army during World War II — died in 1987, "for four decades [he] was widely credited with inspiring and training more leaders of American corporations than any other person."
The blog Creative Capital, written by Spencer Ante as a follow-on initiative to his book, Creative Capital: Georges Doriot and the Birth of Venture Capital, listed the "Top 10 Aphorisms of Georges Doriot." It is a marvelous set of observations and guidance.
One in particular is quite applicable to this time of year — the Christmas and New Year's holiday season, when parties and festive occasions are in full swing . . . and wine and spirits are flowing freely. Thus, take heed of the General's counsel:
"Never have more than two cocktails on any occasion. If any information is to be exchanged over whiskey, let us get it rather than give it."
That sounds like prudent behavior for executives of all stripes. (Another of the General's top 10 aphorisms is this: "Do not have a banker on your board — in bad times he remembers he is a trustee of someone's money"; but we won't deign to comment on that eyebrow-arching maxim at this feel-good moment when Christmas is almost upon us.)
So on this note of party etiquette from the General, we will close out the "Boards At Their Best" blog for 2010, and wish all our readers of this blog and of Directors & Boards and the monthly e-Briefings a joy-filled holiday season and my very best wishes for a resoundingly strong year in 2011. Be sure to come back and read us in January.
Photo of Gen. Georges Doriot courtesy of Harvard Business School
Posted by James Kristie at 9:56 AM