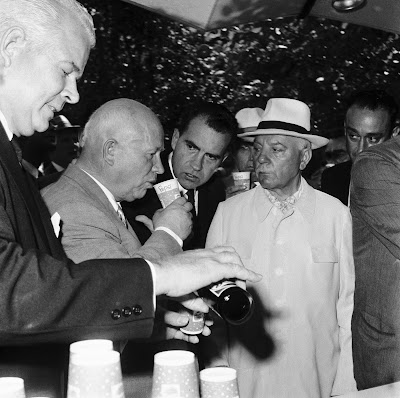 In the fall of 1990 Directors & Boards Publisher Robert Rock and I traveled to PepsiCo headquarters in Purchase, N.Y. The reason for our trip? The Iron Curtain was coming down, Eastern Europe was opening up as a new market for U.S. goods and services, and Russia was undergoing perestroika — a thawing of relations with the West — all of which boded promisingly for American companies. We wanted to talk to a leader who knew how to penetrate previously closed-off marketplaces for some lessons that would be useful for our journal's readers in pursuing this historic business-development opportunity.
That meant talking to Donald Kendall.
At the time of our visit, Don Kendall was chairman of the executive committee of the PepsiCo board. Earlier in his career, he was the engineer of PepsiCo's breakthroughs in Eastern Europe and the Soviet Union (and in China, too). You can see him pictured above at left with Soviet Premier Nikita Khrushchev and U.S. Vice President Richard Nixon at the historic U.S. Exhibition in Moscow in 1959, where one of the exhibits was famously a display of Pepsi-Cola. Kendall, then the president of Pepsi-Cola International, arranged for that exhibit. Over the next 13 years, he patiently worked to develop a relationship with Soviet officials. Finally, in 1972, the company signed a breakthrough trade agreement providing for the bottling and sale of Pepsi in the U.S.S.R. — the first foreign consumer product to be sold in that nation. By 1990 it was the leading foreign soft drink in the Soviet Union, widely available in restaurants, grocery stores and from street kiosks, and was also the most widely distributed soft drink in Eastern Europe.
Kendall was elected chairman and CEO of the corporation in 1971 and held those positions until 1986. Bob Rock and I spent an hour with this affable veteran of global expansion, capturing his memories of those very early forays into inhospitable markets — asking him everything from what Moscow was like in 1959 to the intricacies of bartering Pepsi for vodka to lessons for CEOs in venturing abroad.
Of course, this recall of our visit with Kendall is prompted by PepsiCo's bold bid for Wimm-Bill-Dann, an offer of $3.8 billion for a two-thirds stake in the dairy and juice company — the largest acquisition by an American company in Russia.
Here are two of the questions we lobbed at Kendall, and his answers give you a taste of how this Pepsi visionary thought about risk and opportunity.

Directors & Boards: Given the current instability in the Soviet Union, would you encourage your colleagues in major Western companies to enter the country at this time?
Kendall: Absolutely. There is no place with greater opportunity. If you wait until you have stability and convertible currency, the opportunity is going to be gone. When you have an opportunity is when there are problems — when everybody is not running there. In running a business you have to take risks. Where there is opportunity there is always risk. If there were no risks in the Soviet Union, someone else would already have the business. So I don't think instability is something that would stop me from going to the Soviet Union. What is going to happen? They are not going back to what they had before. You might have civil unrest. A lot of the republics may end up seceding from the union. But they are going to have some system that will be different. It probably won't end up like the United States or Germany. It will probably end up more of a socialist country. Nobody knows how it is going to end up. But there will be some structure there in which you can continue to operate. Nobody would have dreamed years ago that you would have what's happened in the Soviet Union today. But I believed back then that given the opportunity, we could be successful. We were successful under the old system, so you know we are going to be very successful under the new system.
Directors & Boards: You even held a PepsiCo board meeting in the Soviet Union way back in 1974 — the first U.S. company to do so. Do you think other boards have begun to embrace the opportunities to be found in the Soviet Union and in Eastern Europe? Or is it more of a curiosity?
Kendall: I wanted the board to understand the opportunities. One of the problems we have in the U.S. with our international operations is that a lot of chief executives don't get involved. Somebody said one time that a lot of chief executives are inclined to travel the 'silk stocking' route — they love to go to London, Rome, and Paris. They won't go over to the Soviet Union and conduct negotiations. This will change over time, but if a chief executive — the decision maker — goes over there, he can get something done. Furthermore, you don't get the enthusiasm for something unless the chief executive gets involved. The same is true in China and in a lot of other countries. You must go there and find out what the opportunities are.

Identifying opportunities, measuring risk, making bold moves, and reaping rewards — that was Don Kendall's 'Russia House' formula for Pepsi's growth and success, being applied again in the Wimm-Bill-Dann deal.
Posted by James Kristie at 6:13 AM